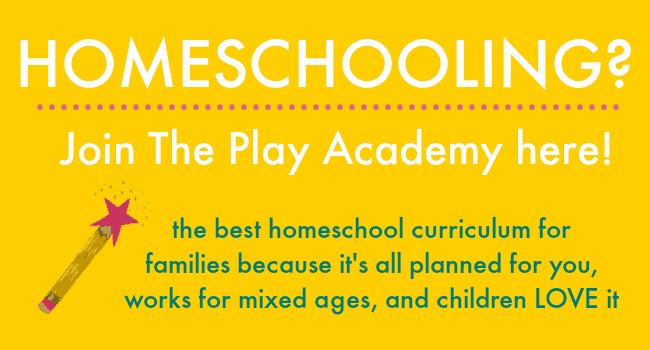 When you’re nurturing children I think you should always start with them – what they’re interested in and want to explore. At the moment my youngest is really enjoying playing trains, so I’ve been using this as a way to incorporate some ideas about shapes and colours.

Yesterday we made a ride-on train from a cardboard box, which has given us lots of role playing fun. We’ve been talking about what happens at a train station, where you might go on a train and how trains work. This  lead us on to talking about trains going underground, so we looked up a picture of the London Underground map. And wow! She was captured by all the lines and colours, and wanted to know the names of all the stations. She was tracing her finger along the different lines (which is great hand-eye co-ordination practice) and I thought she might like her own map which she could drive her wooden trains along. This turned out to be a great idea as she really enjoyed making her version of the map. 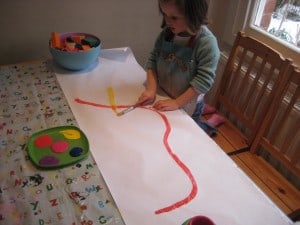 We used a long roll of paper and it was great for her to have the space to really extend her painting. And she knew the names of all the colours too.

Once it was dried we brought over her train set to bring her map to life. 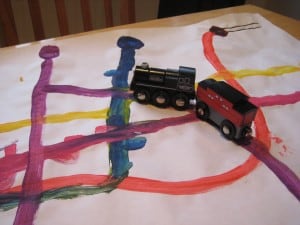 Another way we explored the theme of trains was to make pictures using felt shapes. This gave us the opportunity to name the different shapes, count their sides and trace our fingers around their outlines. We looked at our wooden train to see what shapes it was made up of and then used the felt shapes to re-create the train in our picture – comparing the 3D object with our two dimensional picutre. 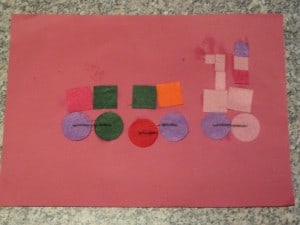 I’ve got a couple more train-inspired play ideas coming in the next post too. One helps with pre-reading skills and another is good for maths. Hope you’ll come back and see them.