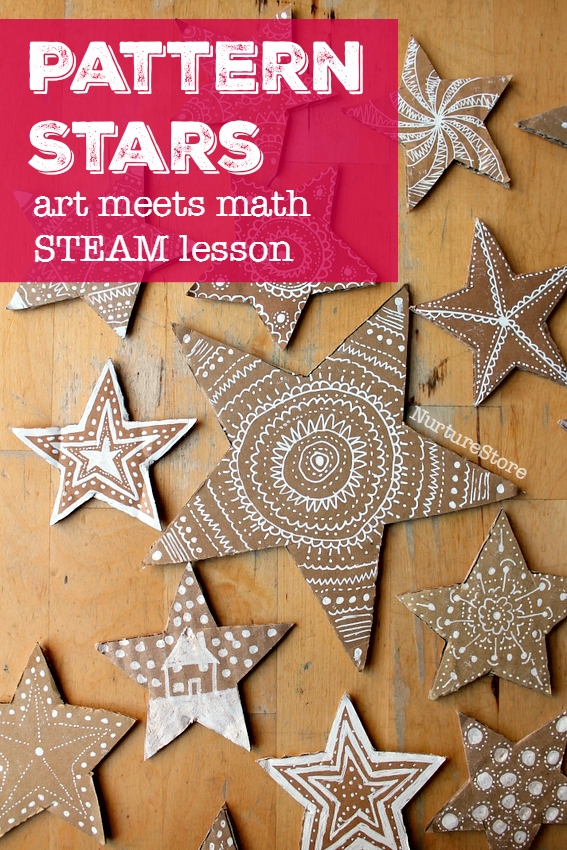 >>>> Combine math and art with the ART of CIRCLES resources. Available here.

How do you draw a star with five points? This simple question, which came up when we were making some decorations, is a great starting off point for a combined math and art lesson.

There are many natural links between math and art, and combining both in your lesson plans allows children to use their whole brain.

Lessons which bring together these subjects, which are often split into separate disciplines in schools, are often called STEAM. This stands for Science, Technology, Engineering, Arts and Math. It’s that all important A for Arts which brings the special benefits of opening up opportunities for children to learn using both right- and left-brain characteristics. It makes lessons more engaging for children, whether they favour the art side of things or the math/science side.

Seeing how math is artistic and art is mathematical helps children develop a deeper and broader understanding and appreciation of both. 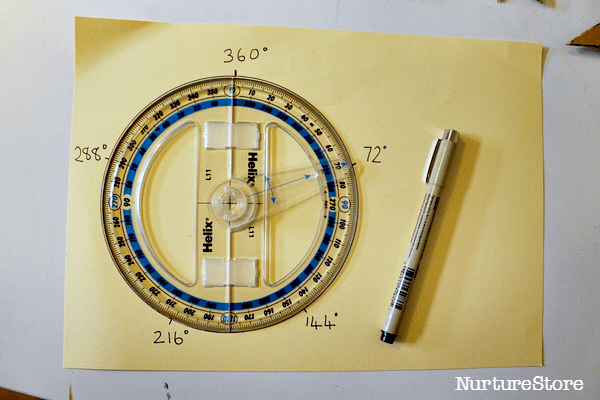 In this pattern stars lesson my daughter met a new tool, a new concept, and some new vocabulary. We also got to enjoy some art, which is always a hit, and just the right kind of activity to include some math in the creative, hands-on, needs-to-be-real-not-abstract way of thinking my daughter favours.

We’ve worked with right-angles before, but the concept of measuring angles in a circle using degrees was a new thing.

She used a circle protractor for the first time and found out that 72° is the magic number when it comes to drawing a five-pointed star. The protractor told her there were 360° in the circle. Sharing that number out fairly between each of the five points of her star meant 360 divided by 5 = 72. 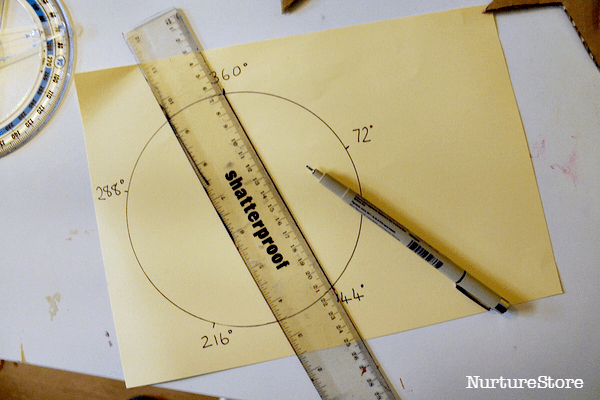 After marking out the points around the circumference, we used a ruler to join up the points, skipping a point each time until we’d used them all up and completed our star shape. 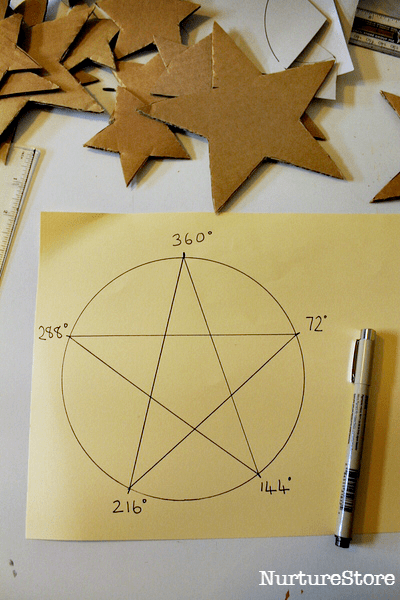 This then became our template and we used it to cut out lots of stars from some cardboard packaging. We also made a smaller star template and found out that it doesn’t matter how big or small the size of the starting circle is: if you want to make a five-pointed star, you need that magic 72° number. 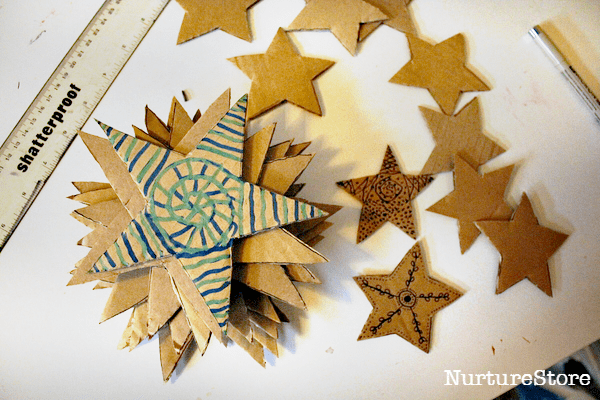 Then for the decorating. We tried some coloured markers, our trusty fine black pens, and some chalk pens but our favourite was our Uni-ball signo white pens. These looks like white icing on gingerbread cardboard stars.

Want to try this? Here are some affiliate links you can use if you want to get the same supplies:

This page contains affiliate links from which we earn commission.

As an Amazon Associate I earn from qualifying purchases.

Chalk pens for US readers and UK readers

White Uni-ball signo pens for US readers and UK readers <- our favourite art material at the moment! 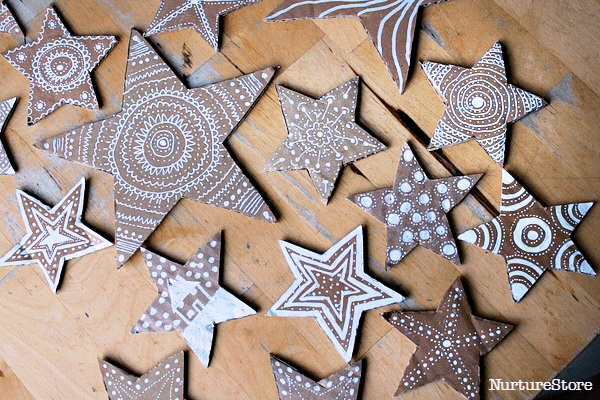 Each star was given its own unique design. We decorated both sides so we can string them up in the window as a mobile. And we were became quite addicted to making the gorgeous white patterns so we wanted to double up on the number we had to use!

A few blank stars and the white pen are easy to pop in a pocket and we’ve been taking them with us when we’ve been out and about, handy for a quiet moment when you want to doodle. They were popular with my nieces at our family Christmas party too! 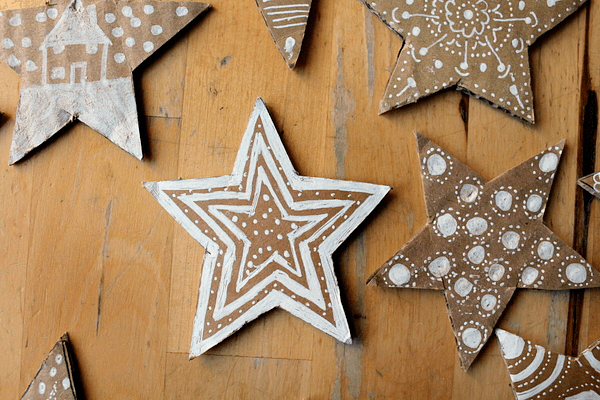 You can of course add any design you like to your stars but you might like to keep the mathematical frame of mind going here too. You might work with the concept of bigger and smaller and make a concentric design, as above. 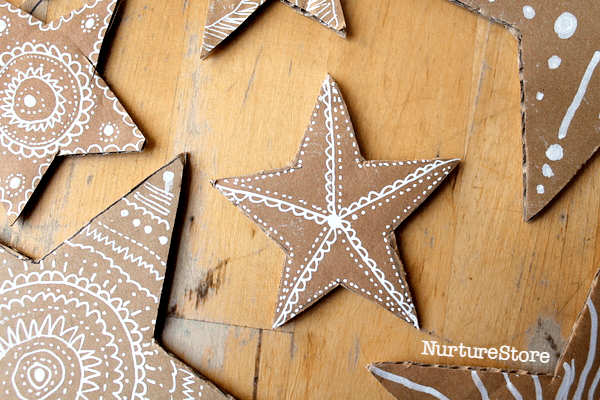 Can you make a symmetrical design on a five-pointed star? If you’ve worked with a symmetrical design before where you’ve ‘folded’ down the central line – easy on a square or a circle – you might like to explore the idea of radial symmetry on your star, as above, where the symmetry is radiating around a central axis. 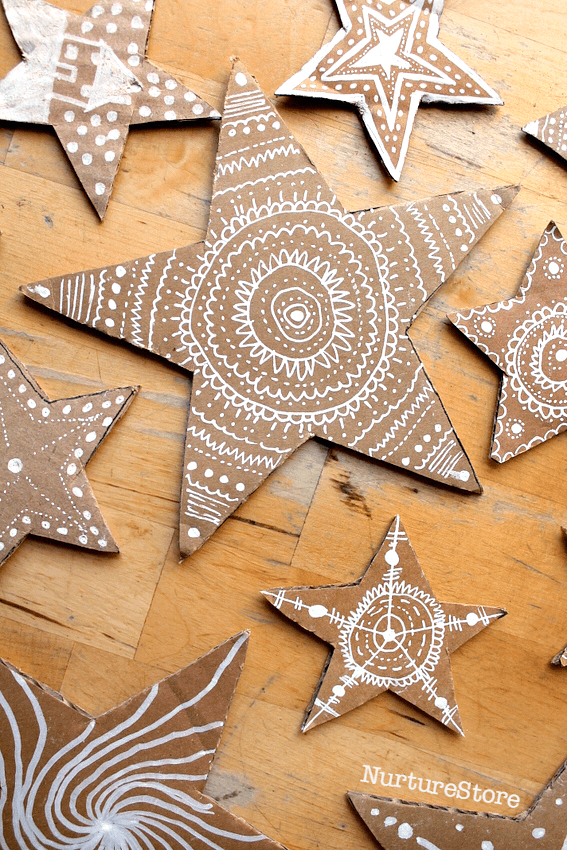 You could try a circular mandala design, using many different patterns to complete each layer as you work outwards from your centre point. 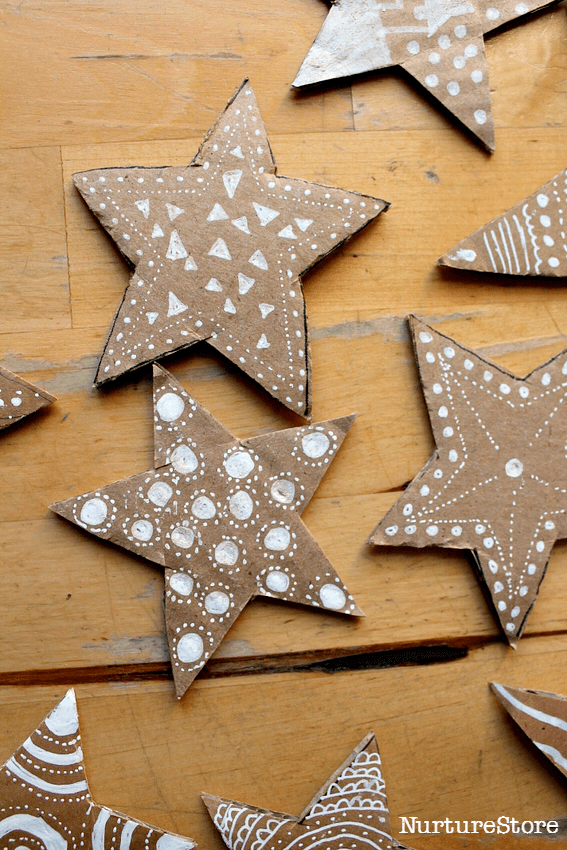 Or you could use shapes to fill your stars, like the circles and triangles above. 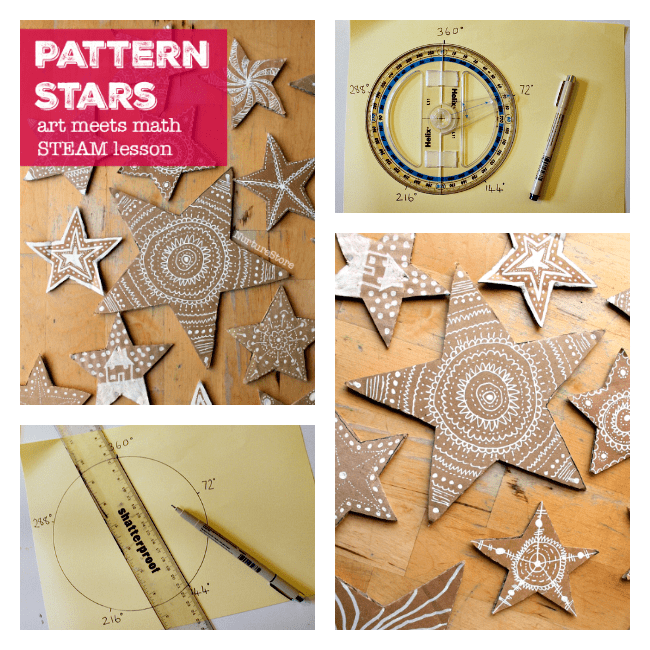 If you like combining math and art, and if you’re looking for play-based exploration and discovery of math and science concepts, come and take a look at our Fizz, Pop, Bang! Playful Science and Math Activities.

And for more math-meets art resources, join my ART of CIRCLES workshop. 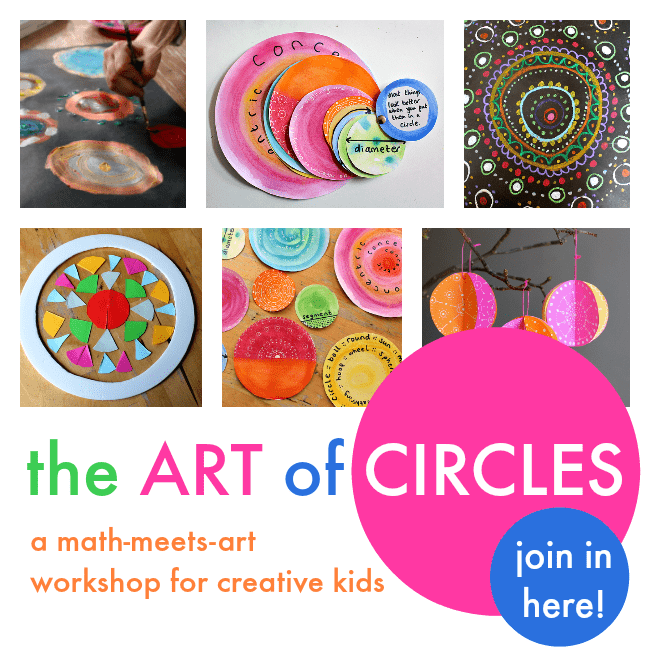